The glass bottle kiln is built with recycled wine bottles, which are held together by sandy soil in order to optimise their setting and to make them stick together. Approximately 600 glass bottles are needed to reach a height of 2 metres. They are placed one against the other in the shape of a circle, with the necks of the bottles facing towards the inside of the glass kiln.
Much care is needed in the construction, due to the slippery and anti-absorbent surface of the bottles. The firing, which is carried out with wood, must ascend gradually, taking from 10 to 12 hours, to arrive at a temperature of 800-900°C, the point at which the glass begins its fusion. Bottles of different thicknesses will have a different fusion point, thus increasing the unusual character of the said fusion, which will never be equal to the preceding one.The first thing to do is to prepare the base of the bottle kiln with dry-walled refractory bricks. These serve first of all to give greater stability to the bricks, which rest on top of them. At the same time, the combustion chamber is realised in their extension.

At first glance, the structure of the glass bottle kiln itself is spectacular; then, the firing of the kiln is something unique, seeing that the reaching of the temperature is done in such a way that it happens in the dark, because the light of the firing chamber is transmitted to the outside, inventing always new plays of light each time.

Inside the bottle kiln, the flames can be seen to rise slowly towards the chimney until exiting and dissolving in twirls of a thousand sparks. In any case, the unusual characteristic lies in the correct fusion of the bottles inside the kiln, which can be opened and observed the next day. 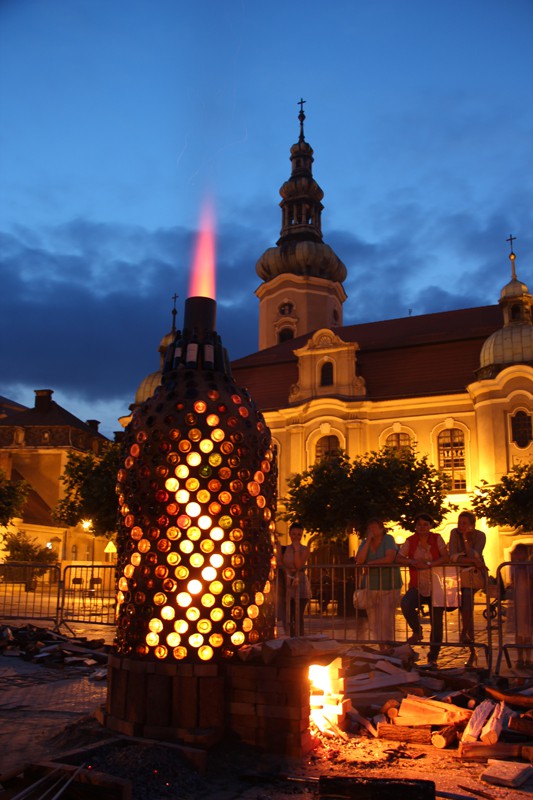